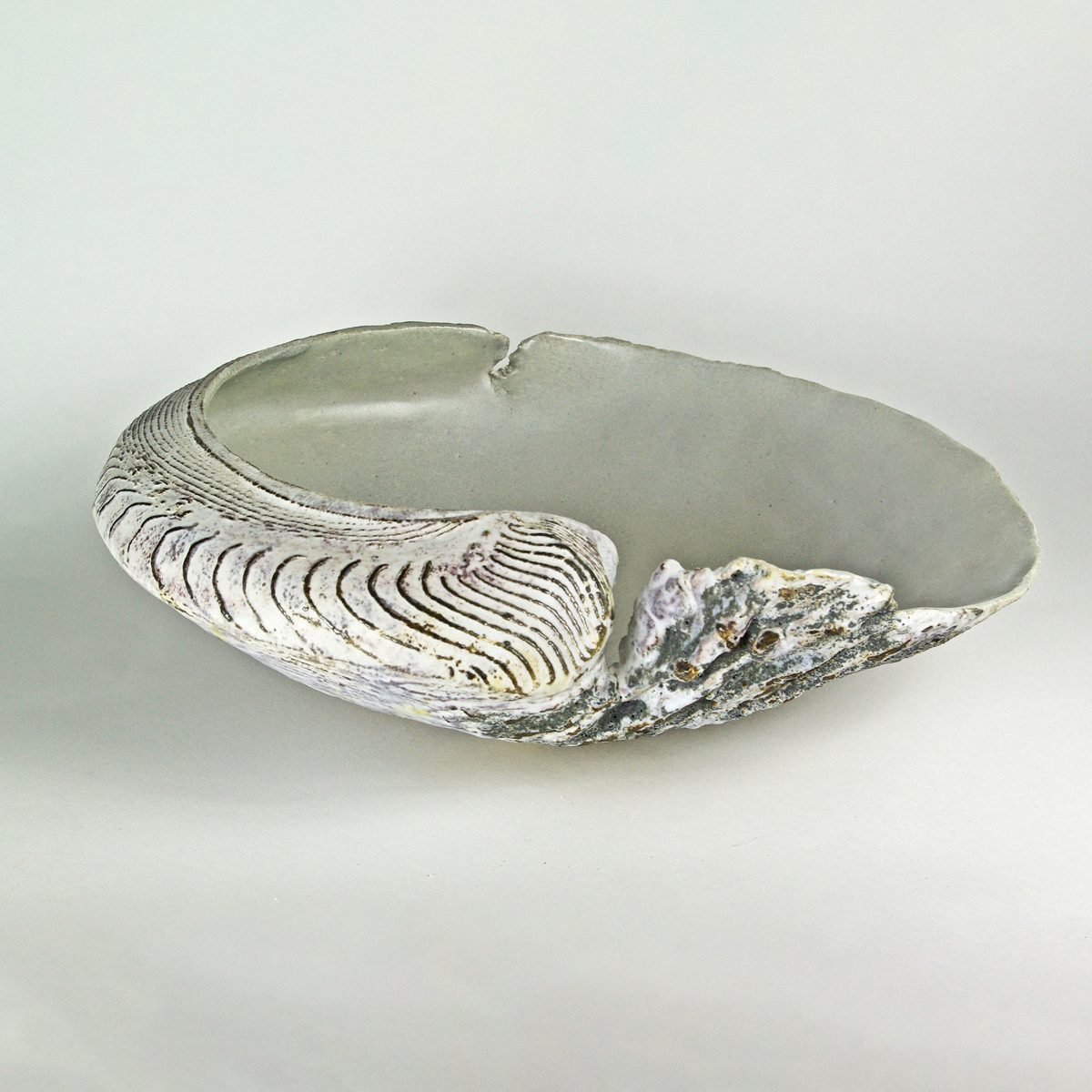 New work now in and ready to see and buy online

Bringing together techniques and ideas from a lifetime of ceramic-making, Adela Powell’s recent work has found a strong, free voice which we celebrate in this major exhibition.

Having studied natural sciences and made a habit of observing the natural world, including the effects of nature on manmade items that wash up on our beaches and rivers, Adela Powell’s ceramics examine rust and decay, strong forms with frangible surfaces, shell forms with smoothest sensuous insides and robust rough exteriors.

Her glazes are dripped and crackled, layered deep, with areas of shiny rich colour abutting chalky semi-transparent over-glazes. This is an artist working in three dimensions, sometimes making organic forms and other times pressing in abstract marks or almost figurative patterns. Her work is as fascinating close to as it is from a a distance. From 14 April, you will be able to come and examine it face to face, but we are taking pieces out as they sell, so don’t delay!

Adela Powell’s new ceramics can be viewed below in three sections. The major pieces, the can forms and the varied forms. Please call us on +44 (0)1308 459511 or email on gallery@sladersyard.co.uk with any enquiries. We can ship ceramics to you.

Adela Powell’s ceramics are inspired by the sea and coastal landscape. She searches for universal patterns, textures and forms in nature, where science and art are inseparable. Her method is experimental and different every time. She uses various clays including mud from the Dorset coast and from the Tamar River. Sometimes she incorporates other material she finds at the water’s edge, both organic and inorganic. The inherent tactile and textural qualities of clay are enhanced with many layers of oxides, slips and glazes which she fires to 1265 degrees C in an electric kiln after a bisque firing in a gas kiln.

She has been a professional potter for many years. Born in the Wirral, Cheshire, she read Natural Sciences at Liverpool University, and the science of the natural world still plays a strong part in her inspiration. She later attended Plymouth College of Art whilst bringing up her young family. A move to Cornwall over 30 years ago had a great impact on her work. The natural environments of coast, moorland and river valleys have influenced her in many ways which can clearly be seen in her forms and colours. Her techniques, including mark-making, found materials and many layers, produce a visual layering evocative of erosion, decay and history.

Adela Powell is a selected member of the Craft Potters Association in London. Last year, she took part in the new Celebrating Ceramics Fair in Oxford, unfortunately cancelled this year. She enjoyed a long association with Badcocks Gallery in Newlyn, Penzance, who also showed her work at the Affordable Art Fairs in London. She has exhibited regularly at Art in Clay at Hatfield and at Artmill Gallery, Plymouth. She has also recently exhibited at Innovations in Ceramic Art at the Guildhall, Cambridge, and at York Ceramics Fair. We are delighted to show her work at Sladers Yard.

Sadly Adela Powell is no relation to Anna Powell, Director of Sladers Yard.